Union Station Access Project will have region-wide benefits. It’s just one of several projects to improve passenger rail across the Midwest thanks to new federal infrastructure funds. 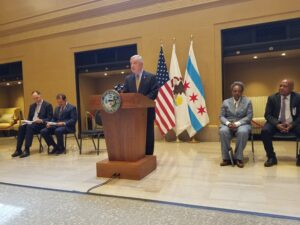 The $418 million project is a joint effort by Amtrak, the Illinois Department of Transportation (IDOT), the City of Chicago, Metra, Cook County, and Michigan’s Department of Transportation. The project partners recently applied for $251 million in federal funding from the bipartisan Infrastructure Investment and Jobs Act’s new MEGA grant program, which provides federal funding for large projects of regional significance. And just last month, the Biden administration and USDOT announced $233 million in grants awarded to upgrade intercity passenger rail service out of the State of Good Repair Program, including $3 million for Chicago’s Union Station.

This is very good news for Chicago, for the Midwest, and for the planet.

But the station itself is old and crowded, and approaching tracks are convoluted.  The Concourse receives over 120,000 daily visitors, including passengers from 60 Amtrak trains and 300 Metra commuter and intercity trains.

Enter the Access Project, a $418 million proposal to strengthen the hub of these vital transportation networks.  The work would include:

Longer term improvements not funded by this project would include improving the connection to the CTA Blue Line and improving ventilation in the station. 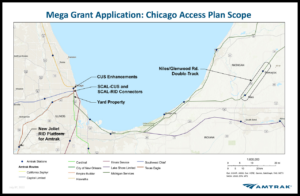 In short, this project is key to realizing the benefits of the Midwest high-speed rail network. We are heartened to see the strong coalition in local, state, and federal leaders committed to moving this forward. By providing a fast, clean, and attractive alternative to driving, improved Metra and Amtrak service will reduce air pollution and climate change pollution and strengthen Chicago’s economy.

Union Station is just one of several pieces of good news for passenger rail in the Midwest. After a drop in ridership during the pandemic, Amtrak is now seeing booming demand. Service is rebounding on several lines, including Missouri’s River Runner from St. Louis to Kansas City and Maple Leaf service to our Great Lakes neighbors in Toronto. Thanks to track and signal improvements, we’re seeing higher speed trains in Illinois and Michigan. And the agency is also preparing for even more growth thanks to new federal infrastructure funding. A proposed train from Ann Arbor to Traverse City, Michigan just received funding for a second phase of study, and several more cities and states will see new trains coming soon.

As we told DOT Secretary Buttegieg in our formal support of this project, “Growth of the national rail network is paramount to addressing the urgent needs of the climate. This project directly addresses climate change by encouraging transit mode shift away from carbon intensive automobiles and airplanes to rail at the local, regional, and national level by making rail the preferred mode of travel by improving user experiences and by increasing capacity.”