Listening to the Data: An Intern Perspective on Air Quality Monitoring

Some highlights and insights from my summer spent monitoring air quality throughout Humboldt Park and the surrounding neighborhoods.

This summer, I joined the team of Air Quality Chicago. Beginning in June, my fellow interns and I were tasked with walking various routes to track a number of air quality factors. We primarily focused on fine particulate matter, also known as PM2.5, which poses a risk to respiratory health and overall wellbeing. In addition to PM2.5 causing a number of health impacts, especially for sensitive populations such as children, older adults, and individuals with existing heart and lung diseases like asthma or COPD, it also contributes to environmental damage.

I covered the areas around my home in Humboldt Park, including Hermosa, Garfield Park, Ukrainian Village, Noble Square, Wicker Park, and Bucktown. My routes followed corridors with high levels of previous data collection, as well as sections that were missing data. Below are some highlights and reflections from the summer monitoring. 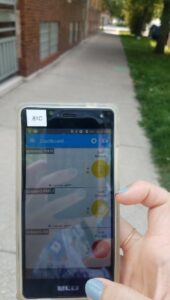 I was surprised to see PM2.5 levels remained relatively low and fairly consistent throughout the nine-week monitoring period. Only at the end of my internship did I notice consistent days where the average trended towards 12-35 micrograms per cubic meter of air (μg/m³).

A ride along the North Side 606 (top image) elevated bike path, compared to a ride taken down Martin Luther King Drive and up the Lakefront path on the South Side (bottom image).

The days I walked west showed higher average PM2.5. West Humboldt Park and Garfield Park averaged 7.3 and 7.5 μg/m³ (respectively), while in Ukrainian Village, Wicker Park, and Bucktown, the average was closer to 5.7 μg/m³. This variation follows known patterns of environmental racism throughout Chicago’s West Side. These neighborhoods have higher percentages of communities of color, who shoulder the burden of the environmental damage and industrial health risks. I found this data to be especially relevant given the current conversations being led by groups like Little Village Environmental Justice Organization (LVEJO) regarding truck traffic’s negative impact on community health, as well as the ongoing debate over the relocation of General Iron from the north to the south side.

Potential for Future Monitoring by Bicycle

As an avid bike rider – for commuting, recreation, and exercise – I was interested in seeing how air quality changed when I went from walking along the sidewalk to monitoring in bike lanes. I wasn’t able to actively watch the PM2.5 count and mark any spikes or sources of pollution, but I usually could anticipate the monitoring results based on how I felt while riding. I do generally feel more impacted by sources of pollution – like exhaust and road construction – on my bike compared to when I am on the sidewalk. As someone who wants biking in Chicago to be accessible and safe for all types of riders, it is important to consider the environmental risks involved in developing bike lanes. 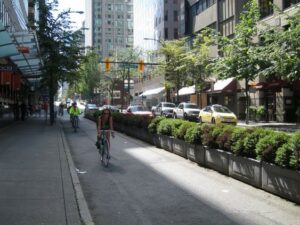 Biking is often seen as a solution to a city’s pollution concerns: more bike lanes = more bikers = fewer cars on the road. But that equation fails when the general well-being of bikers isn’t taken seriously. Connecting the dots between air quality and cycling traffic around Chicago could potentially help in developing better alternative transportation policy. I look forward to furthering this research, connecting with bike advocacy and environmental justice groups, and possibly working with ELPC on establishing the program in the future!