New Regional Rail Plan is a Win for the Midwest

Federal Railroad Administration study affirms regional rail network is stronger than the sum of its parts, high speed rail is on the horizon.

The Midwest is an ideal place for improving passenger rail. In the heart of the country, we are the connection point for the nation, with a wealth of mid-sized cities within a moderate distance of one another and neighboring states. But too often our rail lines have been analyzed individually, instead of being appreciated by the strength of their cohesion. A new study from the Federal Railroad Administration brings the pieces together, providing a new vision for an integrated regional rail network and governance model that could open new doors across the Midwest and the country. This study has been in the works since 2016, and was written in consultation with ELPC and many other stakeholders, so we are thrilled to see it finalized, bringing new attention to the potential for sustainable transportation. 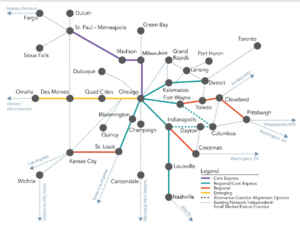 The new plan doubles down on the hub-and-spoke network for trains radiating out from Chicago to other Midwest cities that states have been pursuing for almost 25 years. But it goes further. It identifies the Chicago-Milwaukee-Madison-Twin Cities corridor as ripe for high speed rail – trains on dedicated tracks running electric-powered trains over 125mph – “core express” in the lexicon of this study. Other corridors that are high on the priority list include Chicago-St. Louis, Chicago-Indianapolis, and Chicago-Detroit. According to the study, Chicago and the Twin Cities are the region’s main markets for ridership, “the Core Express corridor between Chicago and Minneapolis-St. Paul would serve over 35% of all network riders for at least one segment of their trip.”

Greater than the sum of its parts

Unlike many prior studies, this one examined the benefits of a NETWORK, not just single lines.  The analysis shows that the network brings in 41% more riders and 59% more revenue than the sum of its individual parts. For example, this study identifies not just the Springfield to Chicago traveler, but the Springfield to Kalamazoo traveler who was ignored in prior studies. The full network – which doesn’t need to be built all at once – covers 3,100 route miles and costs $116-$162 billion to build (wide ranges here depend on which level of service is selected), but it would attract in 17-33 million riders.

It’s a resounding confirmation that rail investments in the Midwest make sense.

A Wise Investment in the Future

This plan demonstrates the importance of the $60 billion for passenger rail contained in the Bipartisan Infrastructure Bill. It’s a resounding confirmation that rail investments in the Midwest make sense. It also demonstrates the importance of the $10 billion in high speed rail funds contained in the Senate’s Reconciliation Bill. Considering the immense threat that climate change poses to our regional economy and the unsustainable expense of expanding our roadways, we cannot afford not to invest in clean transportation alternatives. Per passenger mile, riding a train is 83% more fuel efficient than driving, plus train travel fuels local businesses, walkable communities, and safe mobility, creating a virtuous cycle that will benefit the Midwest for years to come.