As the summer comes to a close, I want to reflect on an ELPC program that made my summer special.

Every Tuesday for the last three months, a team of about ten interns and I ventured to a different Chicago neighborhood and walked about 10 miles to collect data on air quality. Through our air quality monitoring program, called Air Quality Chicago, we help residents gather data on air pollution and use it to advocate for cleaner air in their communities. We use AirBeam monitors, which track multiple types of particulate matter. We focus on PM 2.5 in particular, a tiny category of air pollutant that can be extremely harmful to people with respiratory illnesses. PM 2.5 is also linked to greater risk of mortality and chronic disease. 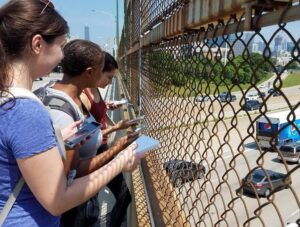 Recording data by the Eisenhower Expressway

We based our observations on the EPA’s levels of Health Concern for PM 2.5. If the monitor senses PM 2.5 under 12 ug/m^3 in the air, then air quality is pretty good and that spot would show up as a green dot on the map. Levels between 12-25ug/m^3 (yellow) are of moderate concern. At 25-55 ug/m^3 (orange), the air is unhealthy for sensitive groups like children with asthma and elderly folks with respiratory illnesses. Once you start to see levels above 55 ug/m^3 (red), the air is dangerous to all people, and sensitive groups are especially at risk.

This program was memorable for many reasons. I saw more of the city of Chicago and the intricacies of its neighborhoods than I ever had before. I got to spend time outdoors in the sunshine, a welcome break from the 9-to-5 office lifestyle. The intense field work allowed us interns to really bond. And I learned a lot about air quality in Chicago, and where more attention and resources need to be directed to protect residents from air pollution. Here are my main observations from this program:

The Same Culprits Increased Air Pollution Throughout the City

No matter what neighborhood we walked through, we saw many of the same polluters causing spikes in the PM 2.5 levels. Diesel vehicles like trucks and buses were a huge culprit. The plume of black smoke you see coming out of a diesel vehicle’s exhaust pipe contains Diesel Particulate Matter (DPM). Researchers classify over 90% of DPM as PM 2.5. That’s one reason why we often find high PM 2.5 levels on busy streets, especially streets with CTA bus routes. This was especially clear on the corner of Halsted & Fullerton in Lincoln Park, a neighborhood with otherwise exceptional air quality. The only places we observed spikes in PM 2.5 – the red and yellow dots on the map – were next to diesel vehicles. 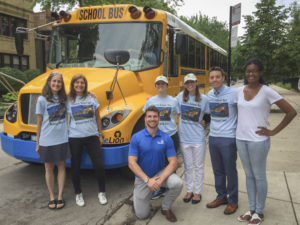 Idling vehicles make diesel air pollution even worse. Despite the fact that it’s illegal in Chicago for diesel vehicles to idle for over three minutes, we observed numerous vehicles that did not follow this rule during our field observations. Idling vehicles raise PM 2.5 levels, making the air unsafe for people with respiratory illnesses. Diesel vehicles are everywhere, but I had no idea they could be so dangerous. That’s why I’m glad to see ELPC working with CTA and local school districts to push for electric buses.

Another factor that caused huge spikes in PM 2.5 was industry. We walked through McKinley Park and Back of the Yards, two neighborhoods that have historically housed many factories. The air quality was poorer than average, and we observed a massive pollution spike outside the Wheatland Tube Co. building on 45th and Western. Observed levels of PM 2.5 jumped to the absurd level of 117. This concentration of pollution is dangerous to anyone, but especially those with respiratory illnesses and people in close proximity for extended periods of time. Despite these dangers, the Wheatland facility sits across the street from many homes. 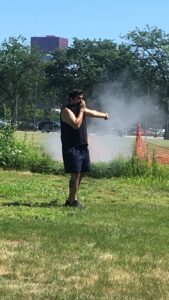 Capturing data at a construction site by UIC

Construction can sometimes cause PM 2.5 spikes, especially when old vehicles and equipment are used. In West Town, an area with rapid development, we noticed unhealthy levels of PM 2.5 throughout the neighborhood. Chicago actually has a Clean Construction ordinance – but we don’t think it goes far enough. The ordinance bans high-polluting diesel equipment from construction sites, but only applies to city-awarded and funded projects that are $2 million or greater. We at ELPC think high-polluting diesel equipment should not be allowed on any construction sites because it makes air quality unsafe for community residents. That’s why ELPC advocates for a Clean Construction ordinance in Chicago that applies to all construction projects.

Smoking is another huge contributor of PM 2.5 air pollution. The first high reading I recorded on my air monitor happened when I passed a person smoking a cigarette. My PM 2.5 reading shot up from the 10-15 range into the low 40s – a very unhealthy reading. Whether you are smoking or walking past someone smoking, you are inhaling a lot of PM 2.5 straight into your lungs. So try to avoid cigarette smoke at all costs.

Fireworks were another surprising source of high PM 2.5 readings. On July 3, readings surpassed 134 in Gompers Park, where kids were setting off small fireworks. We could see the haze in the air from celebrations all week, so it’s no wonder.

Finally, restaurants with woodfire and propane ovens caused a spike in PM 2.5. This unexpected source consistently raised pollution whenever we passed one. Burning wood raises PM 2.5 levels. One PM 2.5 reading we observed when we passed a restaurant with a woodfire oven in Hyde Park measured 38 ppm.

We observed consistently high levels of pollution in McKinley Park and Back of the Yards, both with median incomes below $40,000. We also observed high PM 2.5 levels in West Town despite its median income of about $87,000. 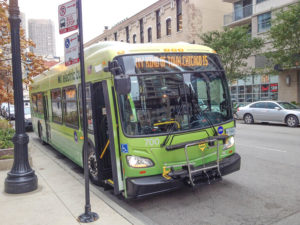 Everyone deserves to live in a community with safe air. That’s why ELPC advocates for clean construction for every community in Chicago. Throughout the city, we noticed that construction sometimes caused PM 2.5 levels to spike, while other times it did not. Construction should be held to the same standard everywhere in Chicago to make sure everyone’s health is protected.

Because diesel buses often caused pollution spikes, I’m glad ELPC also advocates for electric buses. Electric buses could play a huge role in reducing Chicago’s air pollution. Chicago currently has two electric CTA buses, and will be getting their first few electric school buses this fall – we’d like to see those numbers grow to be much more. Not only are electric buses good for the environment, they’re quieter than diesel buses and save the city tens of thousands of dollars a year in fuel costs.

Finally, Each Chicago Neighborhood Had Something Special to Offer 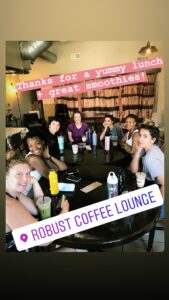 Part of what makes Chicago unique is how each of its neighborhoods have their own character and charm. This program helped me better appreciate that. By walking 10 miles a day through these neighborhoods, I was able to experience each one in a way I could never have by just hearing about them or seeing pictures. Though I grew up in the suburb of Oak Park and have been coming into the city my entire life, there were many neighborhoods I visited this summer which I had never been to before. Trekking through these areas was valuable because it made me realize how massive and diverse of a city Chicago really is outside the places with which I am most familiar.

My personal favorite way to explore new areas was by stopping for lunch in local restaurants each day. No matter where we went monitoring, we could always count on a satisfying lunch.