Get ready! Midwest rail projects are ready to roll

Federal infrastructure funding opens soon, offering a once-in-a-generation opportunity to revamp passenger rail in the Midwest. Here's where we should start

In essence, states are being told “on your mark, get set…” The “go” will come later this year when the FRA solicits formal requests for projects. In the meantime, states and rail advocates need to be getting ready. 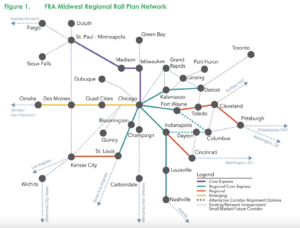 Here in the Midwest, there are numerous projects that are worthy of inclusion. States should be lining up at the starting line for projects like:

This list is not exhaustive, but it represents the best thinking of both states and the Federal Railroad Administration, which last October released the Midwest Regional Rail Plan – a plan that includes all these corridors as worthy of investment.

At the heart of our nation’s transportation infrastructure, the Midwest is a perfect place for passenger rail improvements. Our accommodating terrain and well-spaced cities mean that even modest investments can easily serve millions. Modern trains with innovative technology are the most efficient way to move groups of people, helping to to reduce vehicle pollution and improve mobility options. Now is the time to seize the opportunity and invest in clean transportation solutions that will benefit our region for years to come.