It’s time for a Rail Revolution

At Amtrak’s 50th anniversary celebration on May 1st, President Biden reiterated his call for an $80 billion investment in passenger rail to “help America get back on track.”  This is welcome news in Chicago, the hub of America’s rail network, and throughout the Midwest. For more than 25 years, ELPC has been advocating for faster, more frequent, and more convenient rail service connecting the Midwest’s cities and towns.

It’s vital we ensure the United States has a robust national passenger rail system that can be relied upon for decades to come.

Amtrak has released detailed plans showing just how transformative that investment could be, including:

Amtrak also offers redemption to Wisconsin and Ohio. Back in 2010, governors in those two states returned $1.2 billion in federal high-speed rail grants. Amtrak’s proposal attempts to reverse these short-sighted decisions with specific plans to open new routes in both states. In Ohio, it includes the “3-C Corridor” connecting Cleveland, Columbus, and Cincinnati via Dayton. In Wisconsin, Amtrak envisions rail service between Milwaukee and Madison. These are both excellent projects that ELPC has long supported. 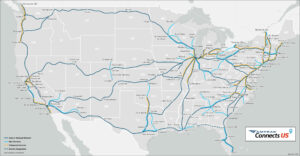 Map of Amtrak’s plans to improve and expand passenger rail through the Midwest, 2021

City leaders immediately recognized the potential value of the Biden/Amtrak proposals.  The Mayors of Chicago, Madison, Milwaukee, Minneapolis, and St. Paul have endorsed this proposal to “connect our cities with communities nationwide in a more sustainable manner.” Similarly, city councils in Columbus, Cleveland, and Cincinnati have passed resolutions endorsing the expansion of rail service in Ohio.

But while new rail service is likely to generate the most headlines, improvements to existing service also offer tremendous potential. By increasing frequency on existing passenger rail corridors, Amtrak can bring benefits to riders and to its bottom line.

For passengers, more trains mean the train schedule is much more likely to meet their travel needs. (And let’s face it, who really wants to board a train in Cleveland at 3 a.m. as currently scheduled?) First up on Amtrak’s agenda for existing routes: a second daily train between Chicago and the Twin Cities. All the engineering work has been completed, and necessary construction to fix bottlenecks could be completed in two years.

Illinois proved the adage that “if you build it, they will come” back in 2006. That year, in response to a campaign ELPC helped lead, Illinois agreed to contract with Amtrak to double the frequency of trains. Within just a few years, ridership had more than doubled on routes throughout the state.

While Amtrak is focused on new corridors and more frequent service, President Biden’s proposal also calls for higher speeds. “Imagine a world where you and your family can travel coast to coast without a single tank of gas on a high-speed train close to as fast as you can go across the country in a plane,” the president recently mused. That’s unlikely in the near term, but Illinois legislators are already preparing for just such a future. Biden’s proposal includes enough money to complete promising higher speed rail projects in the Midwest, including the Chicago-St. Louis, Chicago-Detroit, and Chicago-Twin Cities corridors.

Other potential winners are Midwestern manufacturers and their employees. Running more trains means a demand for more trains. ELPC completed a supply chain analysis a few years ago documenting 460 companies in the rail supply chain across the Midwest, including 84 in Illinois, 99 in Indiana, 7 in Iowa, 49 in Michigan, 26 in Minnesota, 122 in Ohio, and 73 in Wisconsin. Rail supports thousands of jobs and economic development in the Midwest and nationwide.

We must invest in these systems to reduce train travel time, improve access to all users, connect residents in rural communities to job centers and downtown businesses, and medical centers and universities. It’s vital we ensure the United States has a robust national passenger rail system that can be relied upon for decades to come. In the Midwest and across the country, investments in regional rail networks that support and complement long-distance service can play a critical role in reducing climate pollution. More people will leave their cars at home – or find they don’t need one at all – if better and more frequent options to travel by rail exist.