It’s national drive electric week! Electric vehicles are a critical climate solution, providing reliable transportation without the carbon emissions and air pollution caused by burning fossil fuels. But many people don’t drive, and personal cars aren’t the only vehicles on our roads, so ELPC is looking modernizing at all sorts of vehicles, including the ubiquitous yellow school bus!

25 million kids ride school buses every day, traveling nearly 3.5 billion miles/year. In fact, there are more school buses (475,000) than transit buses (about 100,000) on the road today. The bad news is that pretty much all of the school buses on the road today burn diesel fuel; they are noisy and they emit a toxic stew of pollution into the bus and surrounding communities. The good news is that clean electric school buses are already rolling out across the country and getting much needed attention in Congress and from the President. 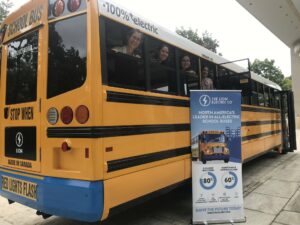 Last week, I joined with some other EV school bus advocates to check out a Lion Electric bus and take a very quiet ride. Our bus driver was rock star former transportation director for Zeeland [MI] Public Schools and executive director of the Michigan Association for Pupil Transportation Dave Meeuwsen. He took us on a pollution-free trip around the National Mall, and it was wonderful to see and experience this technology in person.

ELPC has been working across the Midwest to help municipalities and school districts make the switch to electric school buses. We even helped direct funds for electric school buses in Pekin, Illinois, from the settlement of a lawsuit ELPC and partners brought against another air pollution violator, the Edwards Coal Plant. Local efforts make a difference, but they are not enough to help the millions of children exposed to dangerous diesel pollution every day across this country.

We need Congress to act. ELPC joined allies in urging the President and Congress to invest $25 billion over 10 years toward transforming the school bus fleet. While EV buses, at the moment, cost more than diesel buses up front, they can be cheaper over time, and as the market grows costs will come down. And hands down EV buses are already a win for kid’s health and the climate.

Here is where we are on EV School Bus funding:

If these bills become law, kids across the country could get a pollution-free ride to school in the near future. To help get it over the finish line, ELPC helped gather a coalition of 52 groups from across the country to tell Congress we need funding for electric school buses.