To confront the climate crisis and protect biodiversity, the U.S. Forest Service must move toward a science-based approach to forest management.

In the first week of his presidency, President Biden issued several strong executive orders to combat the climate crisis. The President called on federal agencies to “listen to the science” and develop climate adaptation and resilience plans.

Unfortunately, the US Forest Service’s climate action plans (within USDA) show a blind eye to modern climate science and other impacts by following a “business as usual” approach to logging. ELPC submitted comments on these plans and the need for USFS reform, based on our goals to protect water and animal habitat and act on climate science. ELPC specifically requested the suspension of the Fourmile logging project which threatens the Chequamegon Nicolet National Forest (CNNF) in northern Wisconsin.

Scientists tell us that slowing climate change requires that we protect remaining mature and old growth trees, which sequester and store large amounts of carbon. Logging such trees and forest stands results in additional carbon pollution, while preserving them (a practice known as “proforestation”) results in necessary rapid reductions in atmospheric carbon. The science presents to logging agencies a need for change in practices, but the agency climate plans do not even acknowledge this looming challenge of agency reform. 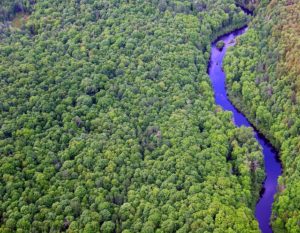 Instead, we see that the Forest Service rationalizes logging based on flawed climate analysis and fails to address these issues in its Climate Action and Resilience Plan. The USFS simply asserts that forest products themselves sequester carbon, ignoring carbon released in the logging and manufacturing process, and concluding that logging practices need not change. The USFS approach flouts the science and the President’s goals and cannot continue to be used to justify logging.

In our direct experience, the US Forest Service does not now operate in accordance with the goals and values laid out in President Biden’s executive orders on climate, public lands, and biodiversity. The agency’s plans do not reflect the need for a new approach to forests and logging. Without facing the need for reform, the USDA and Forest Service are not doing their part to implement President Biden’s executive orders.

In commenting on the agency’s plans, we offer relevant experience and lessons from ELPC’s efforts trying to persuade the US Forest Service to better consider environmental impacts in the management of the Chequamegon-Nicolet National Forest (CNNF). The CNNF is one of the most heavily logged national forests, in which logging is based on very limited environmental review. The NEPA process now used inadequately considers environmental impacts such as to habitat, biodiversity, and climate change. 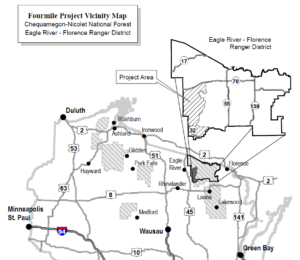 The Fourmile Vegetation Management Project was created and approved entirely under the Trump administration and reflects a broken system of environmental review at the USFS and logging practices at odds with the executive orders. The USFS refused to conduct a full environmental impact statement, listen to the science, or consider project impacts on climate change. The agency acted contrary to President Biden’s orders in multiple ways:

Now is the Time to Take a Better Path Forward

The U.S. Forest Service’s Adaptation and Resilience Plans are silent on the question of whether or not the Biden Administration should proceed with implementation of Trump era projects, rather than suspend and review them based on the best science and climate goals. We renew our call for the Fourmile logging project to be suspended and reviewed as it fits the chronological criteria set in President Biden’s Executive Order.

For the US government to confront the climate crisis, we must confront and reform entrenched practices at the US Forest Service.

As many scientists – including USFS scientists – have observed, the agency’s logging practices worsen global warming by felling mature and old growth trees that sequester and store large amounts of carbon. In the process, they also harm biodiversity. For the US government to confront the climate crisis, we must confront and reform entrenched practices at the US Forest Service. The Federal Agency Climate Adaptation and Resilience Plans must be amended to reflect the need for agency reform and to ensure a science-based approach consistent with President Biden’s critical climate goals.

In his orders, President Biden called on agencies to reduce climate pollution; increase resilience to climate change; protect public health; conserve lands, waters, and biodiversity; deliver environmental justice and jobs; and to grow the economy with clean technology. At ELPC we think these are incredibly important goals, especially important when it comes to protecting forests in the region. We hope the Biden Forest Service will not implement the Fourmile logging plan from the Trump Administration without, at least, substantial review.