When you’re sick with a cold or mixing up a casserole, you probably pull out a can of Campbell’s Soup. The brand is known as a source of comfort, but unfortunately it is also a source of pollution to Lake Erie. ELPC compiled water pollution data from the Campbell’s Soup Company’s Napoleon, Ohio facility from January 2017 through March 2021 and found it exceeded pollution limits on almost 200 occasions, making it one of the worst individual Clean Water Act violators in Ohio. 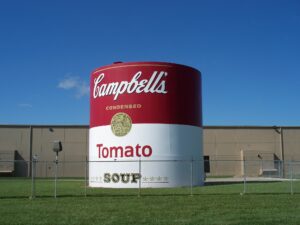 The Campbell’s facility discharges wastewater into the Maumee River about 43 miles upstream of Lake Erie. It has many points of discharge into the river, but the majority are from Outfall 001, which has averaged 6 million gallons per day (MGD) since January 2017. Discharges include ammonia, phosphorus, total suspended solids (TSS), and carbonaceous biochemical oxygen demand (CBOD). In excess, these pollutants can negatively impact aquatic life and human use and enjoyment. For example, higher CBOD levels can result in lower dissolved oxygen levels in the water, thus harming aquatic life. Higher phosphorus in the waters, especially in the summer, can contribute to the formation of harmful algal blooms (HABs) in Lake Erie.

Lake Erie is already plagued with HABs every summer, fueled by phosphorus discharges and agricultural runoff pollution from the Maumee River watershed. In 2014, algae outbreaks were so bad that they forced the City of Toledo to shut down its drinking water supply for four days.  More than 400,000 Ohioans had to rely on bottled water until the algae abated. The city upgraded its water treatment facilities, but the algae problem continues to worsen. Since then, the Ohio EPA has designated both the Maumee River and Western Lake Erie as “impaired” waterways. Those waters do not need any more pollution contributing to the problem.

Recipe for Disaster: Nearly 200 Permit Violations into the Maumee River 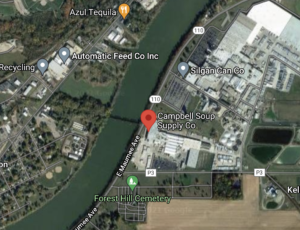 To control pollution at the Campbell’s Napoleon, Ohio facility, the Ohio EPA set limits (daily and monthly) for the facility’s phosphorus, TSS, and CBOD discharges year-round. Since ammonia has the most negative impact in warmer waters, the facility’s ammonia discharge limits extend from May through October. The facility is required to report back on a monthly basis by submitting discharge monitoring reports (DMRs) to Ohio EPA and U.S. EPA.

ELPC reviewed the facility’s DMR data since January 2017 and found that the facility has exceeded its daily limits for the four pollutants on at least 146 occasions and its monthly limits on at least 53 occasions. The Clean Water Act can penalize a violator per day of violation, and it counts monthly violations as 30 days (depending on the month) for penalty purposes. Therefore, the facility’s days in violation with the Clean Water Act could be as high as 1,736 days (or higher!) for penalty purposes. Table 1 and Table 2 provide a breakdown of the facility’s violations of its daily pollution limits. 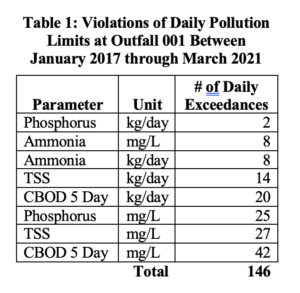 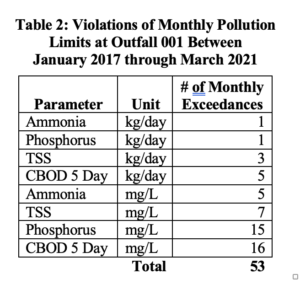 The facility’s exceedances are especially concerning because it is one of the largest sources of permitted pollution to the Maumee River and may be negatively impacting aquatic life and the environment. To demonstrate how much this facility contributes to pollution in the Maumee River, ELPC approximated the total amount of phosphorus and CBOD pollution discharged into the Lower Maumee River Watershed (HUC ID# 04100009) from facilities with National Pollution Discharge Elimination System (NPDES) permits. We calculated the approximate proportion of that pollution attributable to the Campbell’s facility.

The water pollution loading tool on EPA’s Enforcement and Compliance History Online (ECHO) website only includes discharge data from facilities with NPDES permits. For that reason, it does not include the predominant sources of phosphorus pollution driving the Lake Erie HAB problem – nutrient runoff from animal feeding operations and crop fields, the vast majority of which (wrongly, in ELPC’s view) do not have Clean Water Act permits 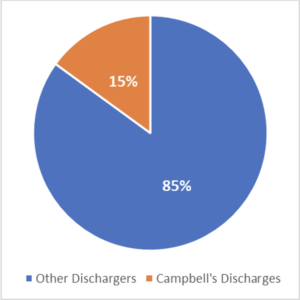 Phosphorus in the Lower Maumee River Watershed (HUC ID#: 04100009). Between January 2017 and March 2021, NPDES-permitted facilities discharged approximately 219,922 kilograms (242 tons) of phosphorus into the Lower Maumee River watershed. Of that, Campbell’s facility discharged approximately 33,371 kilograms (37 tons) of phosphorus, which comprises about 15% of all reported phosphorus pollution into the watershed from permitted facilities. Fifteen percent of reported phosphorus pollution is a significant proportion; thus, any violation of the facility’s phosphorus limits is troubling – especially in the spring and summer, as it could contribute to the growth of HABs in Lake Erie. 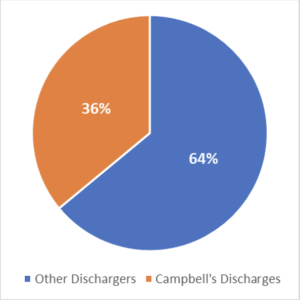 CBOD in the Lower Maumee River Watershed (HUC ID#: 04100009). Between January 2017 and March 2021, NPDES-permitted facilities discharged approximately 2,597,350 kilograms (2,863 tons) of CBOD into the Lower Maumee River watershed. Of that, the facility discharged approximately 922,853 kilograms (1,017 tons) of CBOD, which comprises about 36% of all reported CBOD pollution into the watershed from permitted facilities. One third of all pollution is an enormous contribution; so, ensuring compliance by this facility could significantly reduce CBOD pollution in the Maumee River.

Hungry for Change: Ohioans are Sick of Water Pollution

This spring, ELPC commissioned nationally recognized pollster J. Ann Selzer to check in with the residents of Northwest Ohio. According to the results, 93% of local voters rank access to safe clean water as their top concern, above healthcare, jobs and wages, and COVID-19. A majority of voters polled say the health of Lake Erie will be a major voting issue as they consider candidates to support.

The health of Lake Erie starts upstream. ELPC’s research on the growth of industrial animal agriculture in the Maumee River watershed showed that unregulated manure is a huge part of the pollution problem, but our research does not stop there. The Campbell’s facility has been contributing excessive amounts of pollution for years without facing any enforcement action from either Ohio EPA or U.S. EPA. That should change.

In the Great Lakes Water Quality Agreement of 2012, Ohio promised to reduce phosphorus pollution into Lake Erie by 40% by 2025, but we are nowhere near that goal. The time has come to take this problem seriously. Governor DeWine, Ohio EPA, and U.S. EPA must listen to the people of Ohio and take action to reduce the pollution that plagues them.