Environmental Law & Policy Center public interest attorneys represent the four conservation organization plaintiffs. The $500 million transmission line with up to 20-story high towers would start in Iowa, and then cut through the National Wildlife Refuge near Cassville, Wisconsin, and then run through the scenic landscapes, family farms and rural communities in the Driftless Area, the Military Ridge Prairie Heritage Area, and the Black Earth Creek Conservation Area before ending in Middleton, Wisconsin.

“This lawsuit is not just about one wildlife refuge. It is really an effort to preserve our public conservation lands from encroachment from massive transmission lines and pipelines.”

The Upper Mississippi National Wildlife and Fish Refuge is the gem of the Midwest and among the most visited National Wildlife Refuges in the nation. According to the U.S. Fish & Wildlife Service: “The refuge encompasses one of the largest blocks of floodplain habitat in the lower 48 states. Bordered by steep wooded bluffs that rise 100 to 600 feet above the river valley, the Mississippi River corridor and refuge offer scenic beauty and productive fish and wildlife habitat unmatched in the heart of America…The refuge is designated as a Wetland of International Importance (Ramsar) and a Globally Important Bird Area.” If built in the planned location, the huge transmission line would cut across a major migratory bird flyway used by hundreds of thousands of birds annually, including cranes and bald eagles.

“This lawsuit is not just about one wildlife refuge. It is really an effort to preserve our public conservation lands from encroachment from massive transmission lines and pipelines,” said ELPC Senior Attorney Scott Strand. “For big ‘right-of-way projects’ like high-voltage transmission lines, crossing public lands has too often been the ‘first resort,’ because getting permission from the government has too often been easier than dealing with private landowners.” 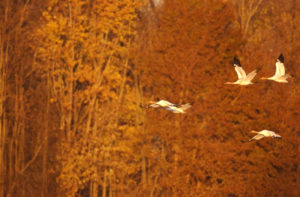 “The Fish and Wildlife Service is authorizing a new and substantially expanded transmission corridor, along a new right-of-way route, and arguing that it is a minor action made compatible by compensatory habitat replacement. This is actually a major violation. If it is allowed to stand, it is a precedent that will reverberate across and weaken the entire Refuge System.”

“In spite of its mandate to protect the irreplaceable Upper Mississippi National Wildlife and Fish Refuge, the government has signed off on a deal that will scar the area. This new transmission line would cut through the wildlife refuge and create a collision risk for migratory birds, such as bald eagles, blue herons and warblers, and jeopardize sensitive species that call this refuge home.”

“The Upper Mississippi Refuge protects important habitat and stop-over grounds for migratory birds. The Refuge is located within the Mississippi Flyway, a major bird migration route used by more than 325 migratory bird species to travel from their breeding grounds in Canada and the northern United States to their wintering grounds along the Gulf of Mexico and in Central and South America. Erecting a high-voltage transmission line that cuts through this migratory path would be detrimental to these birds.”

“The Refuge is part of the unique Driftless Area of Wisconsin where we have been working to protect and restore land and habitat with many landowners and conservation partners for the last 20 years. DALC opposes this unnecessary and costly transmission line in part because it will permanently harm that Refuge. We should instead be pursuing better clean energy alternatives that can grow our local economies, support farmers and sustain our communities while avoiding the massive damage that this line and the others that could follow will have.”

“The Upper Mississippi National Wildlife and Fish Refuge is a gem of the Midwest’s natural resources and landscape.  Approving a huge unneeded high-voltage transmission line to cut across this protected National Wildlife Refuge is just wrong as a matter of both law and common sense.  The Environmental Law & Policy Center is proud to represent these four conservation groups who are committed to protect vital natural resources and preserve this National Wildlife and Fish Refuge for all of us to enjoy today and for future generations.”