The Midewin National Tallgrass Prairie is a special conservation area that allows a glimpse into the past, when Illinois was covered with prairies. ELPC is helping to protect that legacy to ensure Midewin will continue to provide critical wildlife habitat, and a chance for people to connect with nature, for years to come.

Just 50 miles south of Chicago lies the Midewin National Tallgrass Prairie. Midewin was established in 1996 by the United States Congress on the former Joliet Arsenal. Midewin is the largest public open space in the Chicago metropolitan area and northeastern Illinois, covering 18,225 acres. It was created to conserve and enhance habitat for native populations of wildlife and plants, which is ecologically vital because less than 0.01 percent of Illinois’ original 22 million acres of prairie remain. 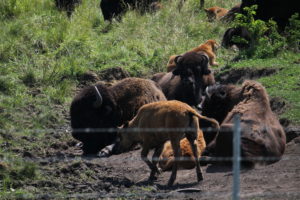 This habitat is especially important for grassland birds, whose populations are rapidly decreasing across the Midwest and the country—in part because they often require large contiguous areas of habitat, and this is getting harder and harder to find. In October 2015, the National Forest Foundation, The Nature Conservancy and many others partnered to bring the bison back to Midewin. The prairie provides a variety of recreational and research opportunities and offers a wonderful opportunity for people to connect with nature.

What is ELPC Doing?

The Illinois and Indiana Departments of Transportation proposed to build a 47-mile long new tollway that would start at Interstate 55 in Will County, run along the southern border of the Midewin National Tallgrass Prairie, and then continue east into Indiana. The Illiana Tollway would have not only routed car and truck traffic along the southern edge of Midewin, but would have pulled increased traffic down the existing Illinois Route 53, which cuts north-south through Midewin. This increased automobile traffic through and near Midewin would have had significant negative impacts from air, noise, and light pollution, and from polluted run-off. ELPC lead a multi-pronged legal, legislative, and media campaign to challenge and ultimately stop this boondoggle project. This campaign resulted in numerous op-eds criticizing the planned Tollway and two legal victories in federal court.

The idea of a third major airport for the Chicago region has been around for decades. Politicians assumed O’Hare and Midway would be unable to expand, so they proposed to spend hundreds of millions of dollars to build a third airport in eastern Will County, just north of the small town of Peotone, on land largely devoted to agriculture. Despite widespread resistance, the idea won’t seem to die. Meanwhile, O’Hare and Midway have continued to expand and modernize, belying claims that the airport is needed. For almost twenty years, ELPC has been bringing public attention to this boondoggle and challenging it at every turn.  So far, nothing has been built, but the idea just won’t die: in 2019, the Illinois legislature earmarked $162 million to build a highway interchange to serve the nonexistent airport.

ELPC is supporting work by allies Openlands and Sierra Club to promote smart transportation and land use planning in Will County and to oppose massive new warehousing and intermodal developments near Midewin. Chicago is a major logistics hub, and neighboring Will County has 4 major interstates, 6 class-1 railroads, a canal system, and large areas of undeveloped land. With increased demand for next-day and same-day shipping, this threat will only grow.

View All
Remember Peotone? Pritzker wants to spend $206 million on it.